Rating:
Having fun with Hitman Slots
The Hitman video game has had so much success that it has been the reasoning behind a couple of sequels, a movie and a whole line of video slots. Which is great news for those that loved the game or the movie and want to wrap it all up in a fun way to make some money? The version that was created by Microgaming makes use of 15 pay lines and five reels. Their version also gives the players authentic design elements that were supplied to them by Eidos (the Hitman game designer).The theme of the original game is very dark, consistent and methodical. At least those are the things that pop into a player’s mind when they first come across that game. Apparently, that was also the way that the creators of the slot version of the game had in mind. Why think that? The Hitman Slots game has a lot of genuine graphics, a black and red palette and a whole tonne of weapons of all different sorts that fill in the reels for the game. The symbols that show up on these reels include guns, knives, garrotes, machine guns, pistols, sniper rifles, dollar bills and lethal injections. Also making appearances on the reels are Agent 47, Insignia and 18 logos. 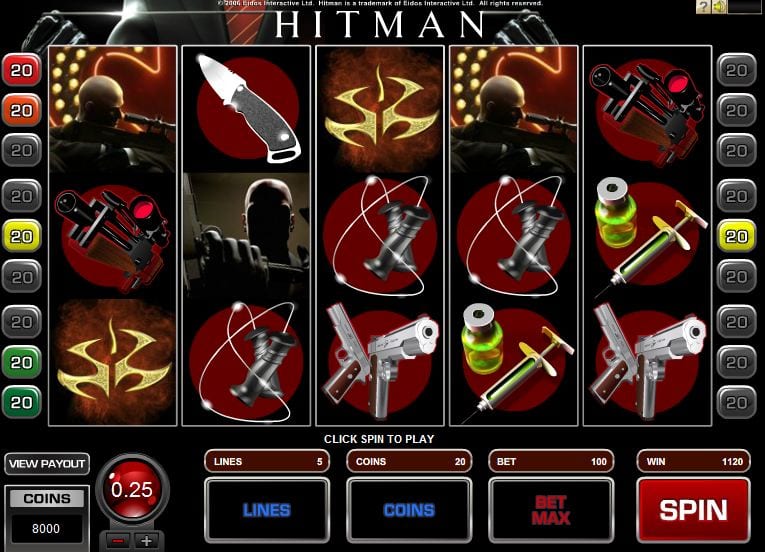 The bonus scatters and featured icons all come to life when a player involves them in a combination that is winning. The Hitman can be seen preparing a sniper rifle, getting a pistol loaded and sometimes even just walks away from a room that is dark during a cut scene after the time that a wild has been used. The music for this game makes too much sense, being calm and calculating, and allows the player to get the feel of the ice cool demeanour that has been set for the game. There are, however, other sounds and effects that are used when a player can get different combinations of icons, wins and also at the times that special features are in use.

Players for this game can choose between a lot of different options for betting. Including just a penny for a spin and $75. The Agent 47 that everyone has come to know so well shows up on the reels with his two handguns that are trademarked. Of course, this icon is going to change into a wild that is expanding, at the times that it shows up on the third, second and fourth reels. Players will notice that this allows them to complete any possible wins by using it to replace all the icons, except for the scatter, 18 logos and laptop.

Players are awarded a pick a win type of game during the time that three or more of the insignia scatters show up at any point on the reels during the game. Players will be able to choose one insignia to show a win that is automatic, that can be quickly added to the player’s amount of coins. Players will notice three to five 18 logos can award a player with 18 free spins that will have an x2 multiplier. It is also a possibility for a player to get expanding wilds and that can trigger the bonus game at the time of the free spins. If a player can spot three or more of the bonus icons, the can activate the ICA Mission where a player must pick between five different targets that have a wide variety of payout ranges.

If the player hovers their mouse over a target, it will tell them the mission, information that they need on the target and the difficulty that they will have with the job that they are presented with. After a player chooses a target they will be awarded with an instant win, and then they will be asked to choose one out of five different weapons in order to get another instant win and they will then finally be asked to do their job, or complete the mission.

Hitman Slots will be able to entertain any player. There are multiple ways to win with a game like this one, giving every player a chance to walk away with a lot of money in hand. With all of cool features and awards that a player is presented with in this game, it is very easy to see how this game is ranking very high in the charts right now when it comes to slot games.