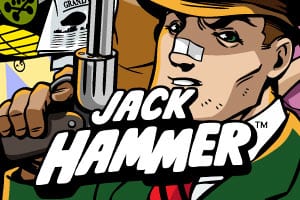 Jack Hammer is a cartoon-themed slot. Net Entertainment, Scandinavian games developer, designed and developed it. Jack Hammer has incredible visuals and mechanics. It is the first Jack Hammer themed slot with the second having a bigger stature although still popular just like its predecessor. It is one of the best-crafted slots. The images on this are very crisp and definite, and the animation is very smooth. It has an excellent framerate too.
The primary mission in this story as with the comic book is Jack Hammer trying to stop the evil Dr Wüten from getting control of and destroying the city. The setting is in the early nineteenth century and the game, it is told in a comic book strip-style sort of way. 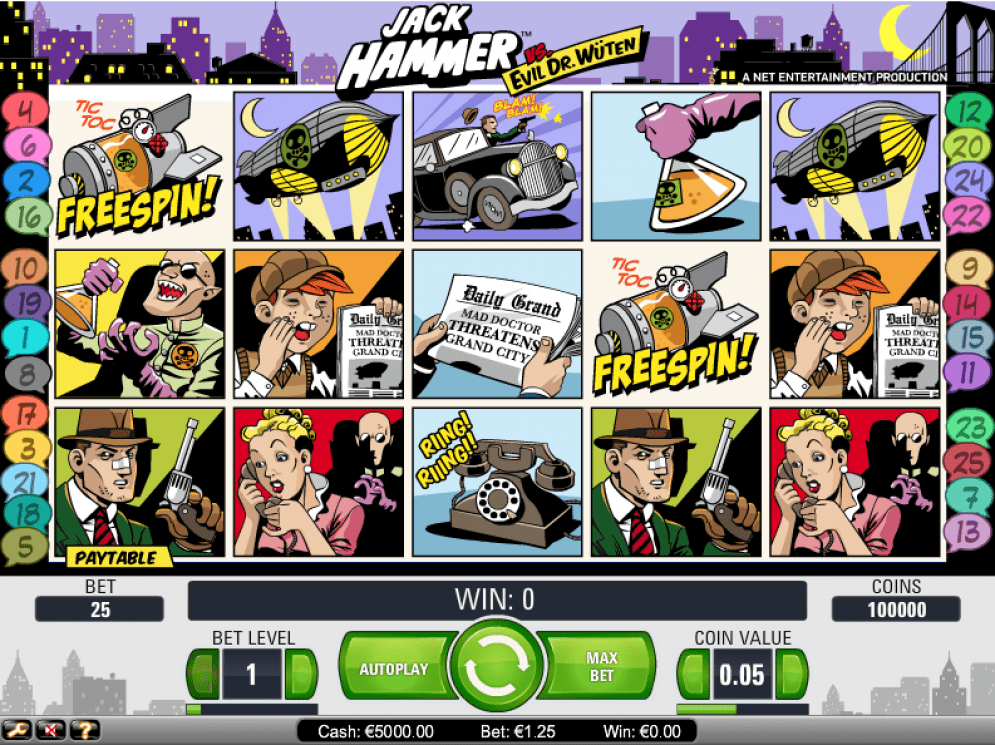 The slot game has plenty of unique features too, and there are also a couple of free spins opportunities. Jack Hammer presents a lot of ways to win.
Procedure of Playing Jack Hammer
The slot features five reels and twenty-five pay lines. It can be found in working Net Entertainment Casinos. There is a maximum limit of ten coins per line, and the values of the coins range from £0.01 to £1. Since the pay lines in this slot are non-adjustable, the minimum bet per spin is £0.25, and the maximum bet is a substantial £250 per spin.
The higher icon in this slot is comprised of a boy with a newspaper, a gangster with a gun, the evil Dr Wüten, and a lady on the phone. The gangster represents Jack Hammer. If five gangsters are struck on a pay line, then you receive 1000 coins. Symbols that contain Dr Wüten’s car, a newspaper, a vial of evil poison and a ringing telephone represent smaller payouts in the slot.
Bonus Features
A free spin symbol on the Jack Hammer slot acts as a scatter icon. It takes the shape of a bomb, and it will give spins free of charge when five or more icons appear on the reels. Players who bag five figures get ten spins for free, six icons give fifteen spins for free, and seven icons give twenty spins for free. Eight bagged icons give twenty-five spins for free, and if a player accumulates nine to fifteen scatter symbols, he or she will win thirty spins for free. A 3X multiplier comes with all free spins won.
The Wild Symbol
This video slot has only one type of wild symbol. The standard wild icon has the word “wild” written on it and is a sound effect bubble. This icon substitutes itself in this slot for all symbols except the free spin icon. A player who has had the highest win per line and in a left to right fashion is paid out with the wild icon.
The Sticky Win
This is by far the best feature of this video game slot. If a player accumulates three or more scatter symbols, the Sticky Win feature will be triggered. The reels that contain icons in this bonus round will be held and the other reels will re-spin potentially giving the player greater wins.
The wheels will continue re-spinning if there are additional wins in Jack Hammer. The Sticky Win round is finished the moment a player re-spins and gets no win. Anything the player accumulates until the point the Sticky Win round is paid to him or her in that instant.
The Jack Hammer Jackpot
The slot has an unprogressive jackpot which is worth 250,000 coins on offer. If a player has staked the maximum wager, then he or she can pocket more than the equivalent of the coins in real money. In Sterling Pounds, the returns can be as high as £10,000.
Net Entertainment has put a menu bar that represents its style in the game. Some players might not be happy with some features of the game style such as lacking the capability to change the number of available pay lines. However, after playing for a while, they will adapt. It is also not a big issue since most players use the available pay lines when gaming with slot machines.
The original Jack Hammer is pure, and it is advisable to play it first before the more advanced and complex sequel. Finally, Jack Hammer is a very decent slot game with a right look and has reasonable wagering limits.