Rating:
Batman: The Dark Knight Rises Slot Machine
He was obviously afraid. The guy was running through the streets virtually blinded by his emotions. He wasn’t looking where he was going and was fueled solely by his fight or flight response. In this case particularly, the flight. You watched him from where you skulked, high up in the city where the gargoyles are your only company. You swoop down, letting the air catch your cape as you ride it down to the streets in pursuit of this coward. They all fear you. They fear the shadows you step from and the silence you control. They fear the night. They fear the Batman. 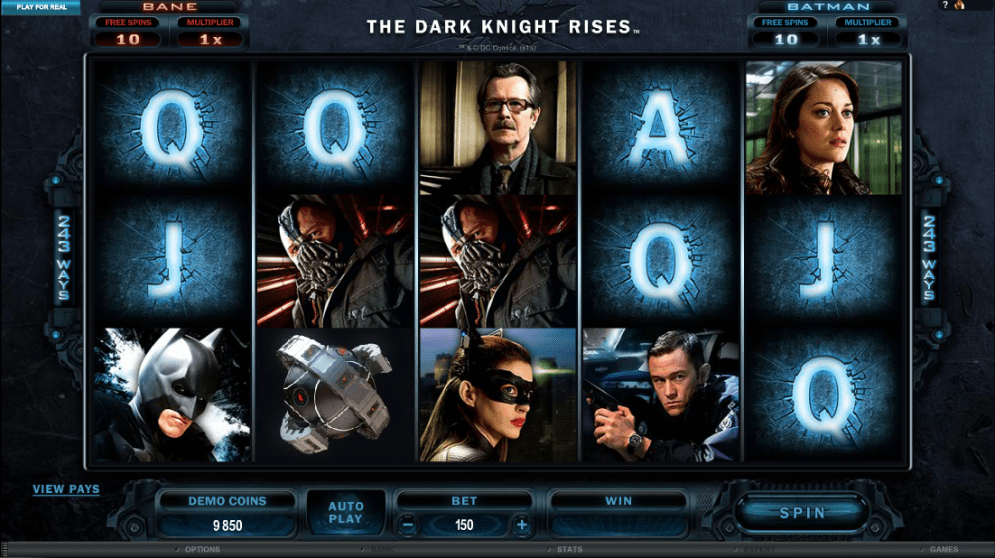 Batman, one of the most popular characters in comic book history has seen portrayed in many different forms of media. Starting from comics, the franchise has spanned to movies, cartoons, video games, audio books, and now slot machines. The origin of Batman begins with the loss of his parents in a violent street mugging. The effects of the night on the young boy’s mind moulded him into the caped crusader he would later become. Batman’s origin story and its subsequent retelling have motivated and inspired millions of fans who consume the story again and again in all of its iterations. With a history spanning over fifty years, the Batman franchise elevated to yet another level of popularity with the release of the newest Batman film trilogy. This new trilogy, a dark and gripping visual thrill ride, brought movie goers into the heart of the Batman mythos. The third film, The Dark Knight Rises, is the main inspiration for the new slot machine game which shares it’s name. So does the slot machine that dons the same name as the caped crusader do the franchise justice? It does, and here’s why.

The Source Material
The Dark Knight Rises is the third film in the cinematic trilogy that elevated the Batman icon to even further levels of fame. With its various plots to save or destroy the city of Gotham, there is plenty at stake. This provides a level of immersion where it seems as if every bet is a bet to save the city itself. The game does a fantastic job of honouring the source material. One of the ways it honours the source materials is by its gothic soundscape and the bonus of impressive visuals.

The Gameplay
The gameplay for The Dark Knight slot machines will be familiar to anyone who has played either an actual slot machine or an online slot machine. Players place their bets before spinning the wheel. Once the wheel spins the player attempts to match multiple icons in a row. This slot machine has a row of five slots. Matching certain figures provides the bonus of free spins to continue gameplay. With familiar characters and a modernised take on a fan favourite, Batman’s The Dark Knight Rises slot machine stands up high alongside the hero’s legacy.

The Batman franchise has provided entertainment to fans for decades, and with the Dark Knight Rises slot machine, this entertainment now extends to casino goers. Not only will potentially new fans be exposed to the legend of Batman, but old fans will be able to be more comfortable during their online betting. This comfort comes from being beside a character they know, love, and admire. So kick the Bat Mobile into high gear, pack your bearings, and warn the rogue’s gallery because the Dark Knight Rises slot machines are here!