Rating:
Game of Thrones Slot
Game of Thrones is easily one of the most popular television series in recent memory, and that doesn’t even begin to account for the books or the general popularity of the franchise. The hold that Game of Thrones has on a lot of people is undeniable, and there are millions of people around the world who eagerly await the release of the next season of every year – but it hardly ends there. With so many games, quizzes, and memes based off of Game of Thrones, it was only a matter of time before an online slot came out using the series as a basis – and it should easily please those slots fans who can’t get enough of the HBO series.

With five reels and offering players 243 pay lines, the Game of Thrones slot operating on the Microgaming platform seems like it should help satiate the appetite of those players who are into the series as much as slots themselves. You get all of the symbols used in the series and will see a few familiar faces throughout the game, and can even join the house of your choice and form alliances to help earn tremendous awards – but do note that these awards are monetary and you cannot win the Kingdom of Westeros in this slot. The risk of being assassinated or executed is also not something that you have to contend with in the Game of Thrones slot, so rest assured that you will not be poisoned, shot with an arrow, beheaded, or suffer from any other fatal injuries. The major drawback, of course, is that no matter your luck you still cannot experience sitting upon the Iron Throne. There’s also not any sex involved either, though that’s probably a good thing in a video slot. Nonetheless, it’s a fun game, and you can still win big. 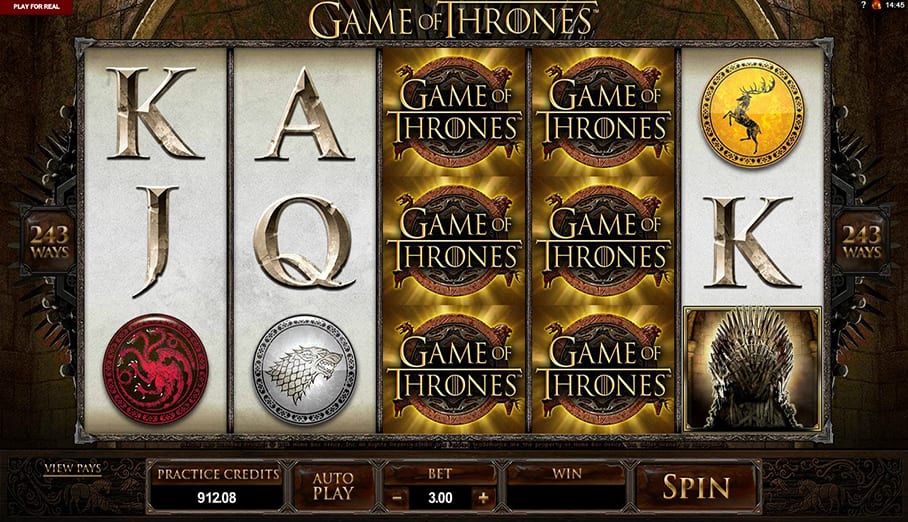 Of course, Game of Thrones would be nothing without the rivalry between the four main houses, and that’s a prevailing theme in this slot. The standards of each house are used as the symbols on the game’s reels, and players can choose their strategy for winning the Iron Throne. You can, of course, do this with the 243 pay lines – a trademark feature of Microgaming’s slots – or there’s a 15 pay line option otherwise.

The Game of Thrones slot comes with some bonuses included, and players can choose to represent any one of the four houses in the free spins bonus round. The bonus round is launched when three or more scatter symbols appear, fittingly represented by the Iron Throne in this slot. A 5x multiplier is allotted to those fighting on behalf of House Baratheon, while House Lannister gets ten free spins with a 4x multiplier, House Stark has fourteen free spins with a 3x multiplier, and House Targaryen takes eighteen spins with a 2x multiplier. The Game of Thrones logo serves as the wild card and can be stacked for additional wins.

Traversing a map of Westerns allows players of this slot also to have a chance to gamble on their winnings, but living or dying rests on the result of a toss of the Braavosi coin – so it’s fraught with inherent risks. Quite simply, the Game of Thrones slot mimics the risks of the characters in the HBO series, and it’s equally high stakes in that players can be killed off at much the same rate. This adds to the thrill, of course, but be warned that it isn’t easy to survive. Then again, if you’re a Game of Thrones fan and a gambler, you probably already knew that.

The visuals of this slot include plenty of clips from the series, and of course, you get the Game of Thrones theme song permeating throughout. If you’re a fan of Game of Thrones and online slots, this one will be perfect for you and should satisfy your appetite until the next season releases – probably even beyond then.