The Lost Island online slot experience takes players back to a magical place of peaceful tranquillity while producing new payouts. Enchanted Island enthusiasts will thoroughly enjoy this 20-line, 5-reel trip journey on a mythical escape to a place of peaceful bliss, while in search of ancient treasure.

Net Entertainment has produced another high definition graphic slot game, not only bursting with new chances to win but also one that stimulates the visual tranquillity for players. The artistry and attention to detail are immediately noticed as soon as players open up the game.

Players start out in a tropical forest at the mouth of a mysterious cave. Purple and golden hues are used to enhance the visual appeal of the game’s background. 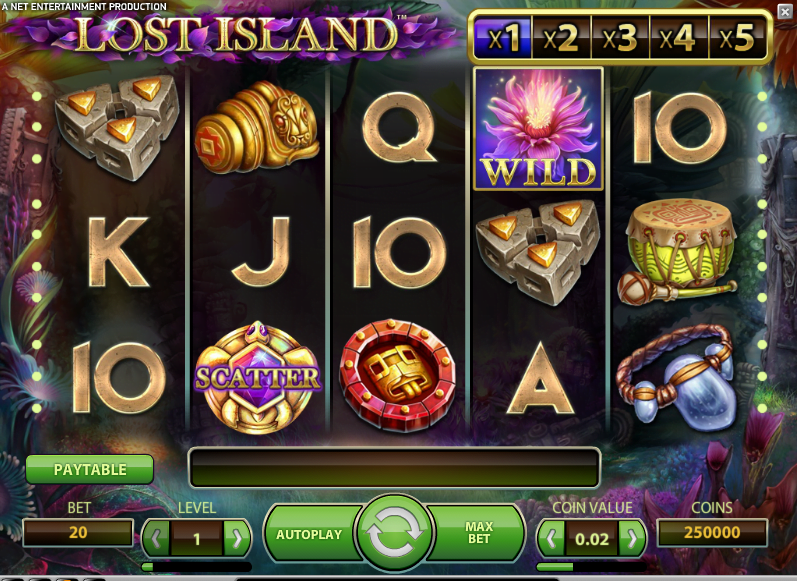 The rich graphics give the allure of a forgotten island full of ancient monuments, once inhabited by an ancient tribe. Players experience the enjoyment of searching for treasures through mysterious jungle-like vegetation.

The graphics are a trademark of Net Entertainment’s consistent trend for developing attractive slot games using a high definition blueprint. Lost Island incorporates that attractiveness with a pleasing sense of calmness. It’s like spinning off winners while seeking mythical riches on an enchanted island paradise.

Lost Island is set up like the standard 5-reel 20-pay line slot, loading in three rows. Players can bet as little as 20p, or inflate their wagers to £100 per spin. The diversity in the betting line makes the game appealing to all levels of players, from the novice player to the avid slot enthusiast seeking significant payout potential.

The cool theme of Lost Island is supported by the feed of symbols. While it uses some standard poker symbols like normal slot games, Lost Island presents an elegant gold overlay to smartly give them an animated transformation.

As players stroll around this enchanted island, the biggest bonuses will be had when they begin to line up interesting ancient artefacts. One of these little trinkets is a round red object with a golden middle. This is the highest paying base symbol, so players should be on the lookout for the red and gold circle.

When wilds begin to appear, it’s great that players can watch them build in the Wild Multiplier at the top right-hand corner of the reel. When three wild symbols materialise at the same time, the combinations will triple the initial winnings.

Then the wilds can compound on top of one another and eventually land a winning spin that is five times the wager. As mentioned, this is a wonderfully designed game for visual relaxation, but it does not lose anything in the excitement of winning.

Another nice feature is that players do not necessarily need to generate multiple wilds to win. Even a single multiplier will boost the winnings, with the idea being; soon a bigger boost is coming.

Players need to watch for the golden turtle. The turtle is the prime scatter and when three lands anywhere on the reel ten free spins will be given. When the golden turtle joins up with any of the Wild Multipliers, you begin to generate bonus payouts, plus more spins.

The turtle scatter can also land in the middle reel, and when that happens, it will stay there for the entire series of spins. The neatest thing is when the golden turtle scatters holds; the reel can start to stack bonuses, which opens up the possible winning combinations.

There’s a nice quantity of bonus opportunities that keep players entertainingly anxious as the reels roll over. The wilds will group themselves and gradually providing a boost until a purple lotus flower appears.

This featured extra will substitute in place of everything except the scatter symbols. The lotus flower will link to a gold multiplier, which will start to increase the pay line after each spin. Players can watch this number build across a chart at the top of the reels.

Landing a series of 5 winning symbols using the lotus flower will post a pay line, 500 times the bet. What’s nice is when the wilds begin to raise the value of each multiplier. Win totals will start to swell five times their value when the right series of scatters and bonus symbols appear.

Players should pay close attention to the building of the multipliers, bonuses and scatters because this is a very good time to launch any accumulated free spins. It’s like playing with free money.

Playing the Lost Island Slot game offers players the enjoyable enchantment of a faraway island paradise, but with all the exciting big winners of a more energised option. Peaceful tranquillity and nice jackpots, that’s the theme of Lost Island Slots.