Rating:
The Magic of The Wish Master Slot
The Wish Master slot game lets players be the master of the wishes. This game by NetEnt allows players to discover the magic of the new world. This game has 20 pay lines and five reels, and the ability to transport players to a land that has big wins during the time that a player triggers the wish master bonus feature. This feature allows the player to have multipliers and wilds added on to extend the excitement of playing the game. This game is even better because it is compatible with the most popular operating systems, Linux, Windows and Mac. NetEnt certainly provides their players with a memorable experience with this fun game of slots using a platform that is super easy to navigate through for all players. 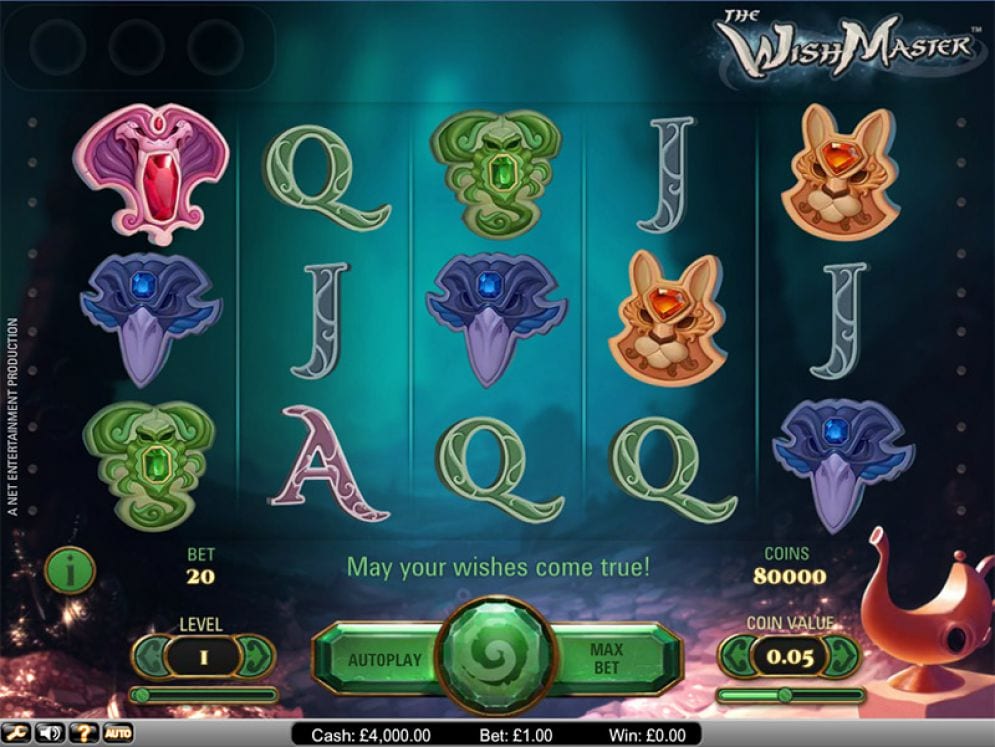 This game of wishes starts off with a short scene that is full of animation, and this scene will make players feel as though they are going through a cave that is just full of different kinds of treasure. Off in the distance, players will be able to see a genie’s lamp that is golden, and the player goes closer to the lamp, the screen will begin to fade into view. Having colours that are deep, rich and beautifully done, with graphics that are designed to amaze, this game was certainly made to create an everlasting effect on the players.

Players will begin to notice the very relaxing, Arabic style of music that begins to play in the background during the game, and at the times that the player pushes the spin button, there will be a sound heard that sounds like coins are falling out. The Wish Master slot game has been said to be one of the most artistic that has ever been created by the team at NetEnt and the symbols that they use for the game follow along with the same waves of creativity. Of course, there are the regular card letters, which are fancy-scrolled letters, Q, J, K, and A which are the lowest values that a player will see in the game, and the higher value symbols are ones that are taken a right from ancient Arabic genie folklore, making the game feel very mystic.

Each symbol of higher value is represented by a highly stylised animal mask that features a gemstone that sparkles. The one that has the highest value is the pink and purple cobra after that is the orange cat, then the scorpion symbol that is coloured a bright green. The final symbol in the set is represented by a hawk’s face which is blue. The genie that plays a part in this game is very ominous, black, grey and is known for being a shapeshifter, and he has eyes that are glowing ember in colour, and there are flames that come out of his magical hands.

This game comes equipped with wild substitutions, and players will notice that during the bonus round the wilds can expand. The wild symbol is a work of art all on it’s own, being the animated word wild shown dancing with the flames on top of a black shadow that is morphing, which of course represents the very distinctive genie. When this wild symbol shows up, the symbol is even enhanced thanks to the sounds that play that sound like a fire burning. This symbol can replace any other except for the scatter symbol.

Scatter symbols which show up and look like another work of art, are represented by a pale orange scroll that has a genie lamp on it. These symbols can unlock the free spins, which will bring you to the wish master bonus feature. To open up this feature, all a player has to do is get one scatter, and there is no way for this feat to go unnoticed by a player, being that when this does happen, a genie will pop out of a lamp and will then fill the screen of the player with his darkness.

After the time that the genie has done his thing, the player will notice that he gives them ten free spins, which is then followed by one of the five randomly generated features that are created to increase the wins of the player.

The Wish Master Slot game is full of fun for all players. This game is loaded with features that are sure to surprise any player and make gameplay that much more exciting. With all of its amazing graphics and special effects, it is no wonder that this game has appeared on so many screens all over the world.