Rating:
Undead Slot Machines?
You manage to hide in the remnants of an old bar. The smell is horrendous, and the windows have been boarded up. The room is silent except for the sound of your laboured breathing you’re desperately trying to calm down. In your panic, you step on a piece of glass that echoes through the bones of the old building. You pause in dreaded anticipation to see if the sound brings them, but it doesn’t. You make your way through the bar, keeping an eye out for useful supplies and find a bottle of unopened water. You greedily take a swig, but catch yourself and instead opt to ration the drink. After making it to the roof, you walk out to see the remnants of the city in front of you. And below you, controlling the streets in a horde of undead traffic: Zombies. 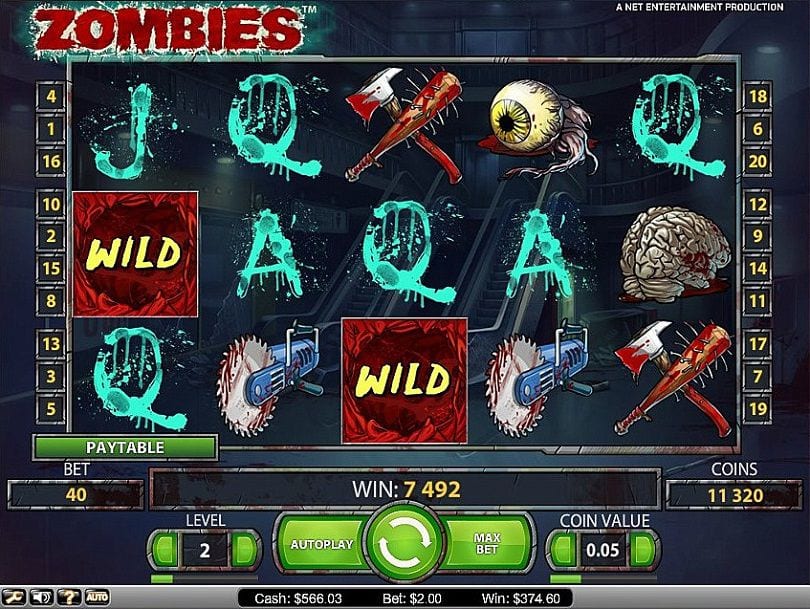 The Mechanics
The Zombie slot machines play incredibly well. Unlike the shambling, rigour mortise laden source material the game is inspired by, Zombie slots have smooth animations and a lack of lag that plagues other slot machines. The developers of the Zombie slot machines have carefully crafted an excellent playing experience for its users. The game, like many slot machines, is based on the rotation of five separate slots. The aim is to match multiple images together to win a free spin, a bonus or a prize. Winning free spins allow users to gamble against the zombie hordes a bit longer.

The Images
Not being burdened by the mechanics, Zombie slots allow the graphical images to shine. With bright popping colours, like bleeding reds, oozing greens, and glowing cyan, the imagery in Zombie slots only adds to the immersion. The science fiction and horror atmosphere provided by these images doesn’t muddle the gameplay in anyway and only elevates the entirety of the game. The slots are adorned with zombie-defeating weapons, organs and painted letters that serve as a bonus for any zombie genre fan. The game is aesthetically pleasing with an ergonomic design that doesn’t clutter the player’s viewpoint.

Entertainment Value
Zombies have always been campy fun. By serving as a backdrop for an online slot machine, fans of the genre and the act of gambling can meet in one place to enjoy themselves without the burden of travelling to a casino. Without the need to spend money on travel and lodging services, gambling and zombie fans can focus their finances on the reason they’re going to the casinos in the first place: to gamble. It’s only an bonus that the Zombie slot machines, look great, play smoothly, and are up to the visual standards most zombie fans have.

The bottom line is that Zombie slots are as fun as they set out to be. With great graphics and a smooth operating system supported by strong mechanics and free spins, people will be playing Zombie slot machines well after the hordes have stopped shambling.