Is Vegas a Gambler’s Paradise?

After all, who doesn’t know the original paradise and the capital of the casino world, the grand Las Vegas?

The city is mainly a tourist attraction and there are dozens of people circling the city and taking pictures of it.

But, there is a group of people that go to Las Vegas in order to have the time (or the night) of their life.

And when I say this, I mean the real attractions and the original purpose of the Sin City; gambling.

Believe me, you’re missing a lot of action, adrenaline, and money.

It’s the real paradise for the gambler who would do anything for incredible casino nights with friends and women!

So, where exactly can you have the time of your life in Vegas?

What are the best destinations and what can you make in order to make the most of it?

The Gambling History of Las Vegas

This city was originally found by railroad workers as nothing else but empty land.

And that when the lust for the Old West came into mind, and into the city as well.

It started off with women for entertainment since this wasn’t a residence for families and an ordinary way of life. 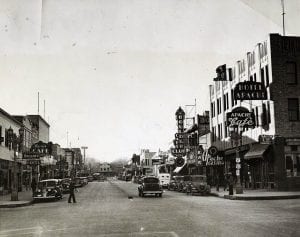 But as people came and went in and out of this city, gambling as an activity appeared soon enough.

And the rest after that is pretty much history.

From one casino house, there were two, and from two it became the famous Sin City.

The first hotel in Las Vegas opened in 1941, and soon after that, Las Vegas pretty much became an attraction.

By the period in the 50s and the 60s, there were already lots of constructions and resorts waiting for people to have the times of their lives.

Slots, baccarat, poker, and every other casino game that you could have to think of was probably already there, in Las Vegas.

The Best Casino Resorts That You Can Find in Vegas

Las Vegas went into history as ‘the city of the devil’, and it has a reason.

Here you can do absolutely everything you want to, and no one will judge you.

Drinking, gambling, women, and living life to the fullest with no obstacles.

According to some people, this is the ideal life that has the peace everyone deserves.

And naturally, there are many casinos and casino resorts that are inviting you to come and look inside.

But, among the streets filled with entertainment rooms and gamble, only a few of them are the legendary ones who have stood here and didn’t give up.

Have you ever heard of the Bellagio and Caesar’s Palace?

These are the casino that I’m talking about.

How to Make the Most of Your Trip in Sin City?

The important thing to remember is to always have fun.

Whether you’re a big casino fan or just like to occasionally spend time with friends in a casino room, you need to relax.

Life is beautiful, and so is the casino experience.

Just take a break from the real cruel world, focus, and enjoy the ride.

It’s the best that way!